Special Lesson: Professional counselors are careful with self-disclosure. Only when the benefit is to enhance the therapeutic relationship is the boundary crossed. This blog is personal, but the hope is the conversations that ensue help enhance all of our relationships.

I have a vivid memory of being a child and asking my parents where they were when Kennedy was shot. It was a common assignment for children of Boomers. We had it easy! There was ONE major event noteworthy enough for all students to explore. If replicated today, my son’s assignment is more like a multiple choice test, the Challenger‘s explosion or the fall of the Berlin Wall. As I publish, today is September 11. My TV and Facebook are littered with memes telling me not to forget or always remember. As I’m told to be respectful and solemn, all I can feel is frustration that there is no “lesson learned”.

My 9/11 story starts with a routine drive to my job as the HR manager of Borders Books. I heard a snippet on the radio with key words “plane” and “New York”. I changed the channel and shook my head.

I grew up in NJ with the Manhattan skyline outside of my window. It was common to hear a broadcaster in Chicago appalled about a plane crash in New York; they simply didn’t grow up knowing how short the runway is at LaGuardia. So, I went back to the offices and started to count cash for the registers while brainstorming a snarky comment to deliver to a coworker with whom I bet on Monday Night Football. As I started wheeling the cash drawers to the register, that same coworker was walking towards me asking me if I heard what happened. Nope. I was not going to let him beat me to the punchline. I quickly quipped some friendly antagonistic comment and tried to wheel to the front of the store. This coworker was a better friend than I gave him credit for because he took me by the shoulder, took me to the stockroom, and put me in front of the TV we use to sneak peaks at football games. I sat on two crates grasping at a box of tissues watching in disbelief with the rest of America for the next few hours.

I wish watching the landscape of my childhood be destroyed was the only way I passed the time that morning. It took me an hour or two to realize that neighborhood that I watched crumbling was where my big brother went to work daily. Thankfully, he was late to get off the subway that day. Not too late, however, not to be stuck in a nearby building watching the day become soot-covering night. The cell phones weren’t working as everyone with loved ones trying calling out or calling in. I learned from my mother that he had reached his then-pregnant wife just long enough to say he was safe but stuck. I remember musing that my brother, who is 6’1″ with a personality twice the size, must be going crazy thanks to a small case of claustrophobia. He made it home safely hours later, but I don’t need a running news story to remind me what it felt like to watch in fear that I was going to be the oldest one in my family if those terrorists won.

Shortly after the building were cleared, the next line of heroes went to Ground Zero. In the same breath, our country banded together and started the two decade trip of falling apart.

My husband and I are friends whose son, one of their four, was born on September 11. He is the living symbol of what we should remember. 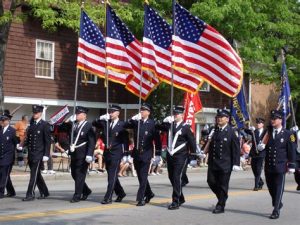 Barrett is always happy and optimistic. He loves to spend the morning with his mother dancing to Britney Spears with freshly painted nails before taking the afternoon to go fishing and learn gun safety with his dad. To truly honor and respect what was lost, we should make September 11 National Barrett Day. The holiday would be centered around celebrating our best selves and accepting the beauty of seemingly contradictory ideas. Feel free to decorate your home with pink dollhouses and fishing poles as you carpool with your neighbor to the EMS parade featuring the men and women whose pay has met their esteem.