I just spent the last few days with my sister wife. We are not Mormon. We were co-workers for four years where we shared a husband, hers by true love and marriage and mine by work. Notice the use of the word “shared”. We lost this incredible man not too long ago and way too soon.

Ironically, these same few days overlapped a funeral. Although the loss was family (by marriage), I was not sad or upset. I went to the service to give love and support to those who were related to him by blood and felt his loss deeply.  My distance lessened when I recognized the profound sadness all around me. There was a daughter estranged from the family for so long she was unmentioned and unrecognized during the service and burial. There was a widow of more than four decades of marriage lost to dementia; I wasn’t sure if she understood what terrible occasion we were marking. 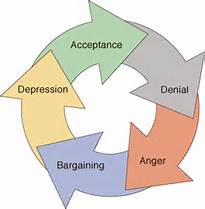 The grief and loss that comes with death always triggers discussions of the five stages made popular (to the tune of being available on WebMD and Wikipedia) by Elizabeth Kubler-Ross: denial, anger, bargaining, depression, and acceptance. Let me join the professional bandwagon  by saying…crap!

Picking Up the Pieces

The grieving process occurs all through your life. It is not just when there is a death. It is important to remember, and not belittle, that LOSS is an obstacle you have survived – from the moment you were not able to use your pacifier until the moment you were not able to remember your name. Keeping that in mind, here are some of the real struggles of grief and loss:

Death is not the only reason we suffer from grief and loss. Each time we don’t live the life we expected, we have to reinvent ourselves. Bringing the successes and lessons learned from a past life into the next life (cue Indigo Girls “Galileo“), makes you strong enough to start again. You just have to start by salvaging the right pieces…