I have been to three “graduations” in the past two weeks. My son has had two end-of-the-year parties to mark his completion of another year of early childhood education. Those parties are not really different than the high school graduation party I attended. The conversations always revolve around how far a child has come and how exciting it is for the next step. Parents congratulate themselves for managing the tantrums (for toddlers and teenagers) and nurturing the signs of independence (for toddlers and teenagers).

In the first week of his life, I already had some very clear expectations for my son:

Sexuality: I never had cravings for food when I was pregnant. I craved music sung by Madonna and Cher. I was excited to think I was giving birth to a gay son who could teach his mother how to dress properly for the pear-shape for which he was partially responsible.

Personality: As regular blog readers, you know I have a sharp wit and irreverent attitude. I expect the same from my son, someone who will undoubtedly follow in his mother’s foot-in-mouth approach to life. Jacob began living up to this expectation hours after his birth; he literally was giving the finger to my husband as Jacob nursed.

Career: At four days old, I explained to Jacob that he was not born to a mother who “would let him be whatever he wanted” when he grew up. I was, and still am, an ardent watcher of Deadliest Catch. I told him he was not allowed to be a crab fisherman.

Despite stereotypical therapists’ views, who we are is more complicated than the expectation of our parents.

The Three Pieces That Make Up the Puzzle of Self-Concept 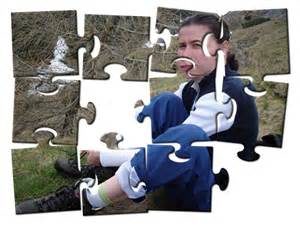